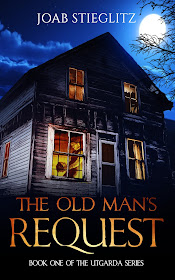 Publisher: Rantings of a Wandering Mind

An Innocent Favor for a Dying Old Friend…

Fifty years ago, a group of college friends dabbled in the occult and
released a malign presence on the world. Now, on his deathbed, the last
of the students, now a trustee of Reister University enlists the aid of
three newcomers to banish the thing they summoned.

Russian anthropologist Anna Rykov, doctor Harry Lamb, and Father Sean
O’Malley are all indebted the ailing trustee for their positions.
Together, they pursue the knowledge and resources needed to perform the
ritual.

Hampered by the old man’s greedy son, the wizened director of the
university library, and a private investigator with a troubled past, can
they perform the ritual and banish the entity? 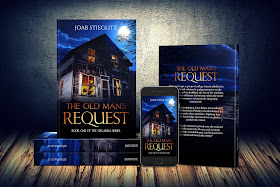 Final papers in hand, Anna  emerged from the Edison science building and
made her way toward Olson Street to catch the trolley to the house she was
renting on the other side of the river. She was petite, with dark bobbed hair,
and smooth pale skin, and wore a fashionable blue, knee-length skirted suit,
white blouse, and a loose, black necktie which flapped gently in the breezes
blowing eastward off the slow-moving Woolley River.
It was another typically beautiful day,
warm and dry, in Wellersburg.  About
halfway across the quad, she spied Father O’Malley approaching hurriedly.  “Hello. Father,” she said with a smile, her
Russian accent revealing her origins. “Is it not a fine day?” O’Malley, a tall,
slender man with short, curly brown hair, usually had a warm, engaging smile,
but today his expression was grim.
“Jason Longborough is in the hospital
again,” O’Malley said. “It doesn’t look good, and he’s asked to speak to you
with some urgency.”  Anna was concerned
and a little surprised. The ailing trustee of the university had been her
champion in the faculty selection committee last summer, but she had neither seen
nor spoken with him since that time. He was directly responsible for her
appointment to fill Dr. McMahon’s chair for three years while he and his team
were on their expedition to Australia. Longborough was also instrumental in
Father O’Malley’s appointment to the Ancient History department to fill similar
vacancies during the Egyptian expedition, which was to occur concurrently.
“Of course,” Anna replied without
hesitation, “I will just drop off these papers in office.”
“He may not hold out that long. Please
come with me now. It may be your only opportunity.”  With that, the priest took the pile of exam
papers from her and led the way toward the Reister University Hospital.

Anna was born Tatyana Trevena, the sole
daughter of poor Russian immigrants. In exchange for passage to Brooklyn, the
sixteen-year-old was married to the much older, exiled Fyodor Rykov shortly
after their arrival in America in 1912. Rykov was an old world man. He treated
his young wife as his property and she lived in submission to him until he died
of a heart attack two years later.
Tatyana inherited a modest fortune.
Wanting to be more American, and having the means to do so, she adopted the
name Anna and attended Columbia University, where she studied Anthropology. She
completed her degree in three years and went on to pursue a doctorate. In 1924,
she did field research for the Russian archaeologist Aleksey Sergeyevich Uvarov
in Gnyozdovo, a part of the Byelorussian Soviet Socialist Republic, the site of
a ring of 10th century Viking settlements.
Upon returning to the United States in
1926, Dr. Anna Rykov, expert in the Varangians, or Russian Vikings, found that
there was little interest in a female professor, especially one of Russian
descent, who had done field work in the Soviet Union and could have potentially
been a Bolshevik. When Jason Longborough reached out to her with a temporary
position at Reister University filling in for tenured staff while they were on
a three-year expedition, she gladly took the offer.
There were many new instructors at
Reister. Among them, Anna met Harry Lamb and Sean O’Malley. Dr. Lamb had just
completed his residency at Reister University Hospital and was teaching Basic
Anatomy to first year medical students. Father O’Malley was well-versed in
Middle and Far Eastern history and served as an Ancient History instructor.
Anna, Harry, and Sean were all new to the area, and the three quickly became
friends exploring their new home together.
She was enjoying the small college-town
life in Wellersburg and its uncrowded streets. The people of Wellersburg were
courteous and friendly, even to a Russian immigrant, on account of the more
cosmopolitan influences of the university. She enjoyed the peace and
tranquility of a small town where everyone knew everyone, and no one locked
their doors.


This was a fast, fun, and spooky book being that it is a Novella in length, I wanted to see where the story would go. I am glad I did. We meet Anna who is a Russian immigrant that comes to American in the early 1900s and is wed to an older man. He passes away, leaves her some money and she uses it to go to school to become an anthropologist. Which at that time a lot of women didn't even go to school but she had the money to do it and she liked it. Then she gets a request from one of the board members and that is where the story gets interesting. He asks her to help him keep "something", locked up in an attic. He also asks two other people. So we have some occult things going on. It's set in a historical setting of the 1930s and a creepy aspect to the story. This book had me at page one. I totally enjoyed the writing and POV. This book was well written and flowed nicely. I didn't get bored and since it was a novella I was able to read it in one sitting. I will have to get the next in this series to see where this continues to go. 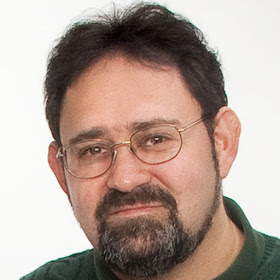 Joab Stieglitz was born and raised in the Warren, New Jersey. He is
an Application Consultant for a software company.  He has also worked as
a software trainer, a network engineer, a project manager, and a
technical writer over his 30 year career. He lives in Alexandria,
Virginia.

Joab channeled his role-playing experiences in the Utgarda Series,
which are pulp adventure novels with Lovecraftian influences set in the
1920’s.

Thank you for hosting!

Thank you so much for stopping in! I hope your find some books to stack your shelf with! =)
Please leave a comment - I love them!